You can always raise more money than your target. Set your public crowdfunding $ goal as low as reasonably possible to increase your chances of success, but aim high behind the scenes. It’s a good idea to have some preplanned ideas to keep up the momentum if/when your campaign surpasses the 100% mark.

But first, a note on why we generally recommend our clients start with a conservative $ goal. When we do the network analysis, the likely fundraising range is wide. Let’s say it comes out at $5,000-$20,000. We set the initial public target at the low end – in this case, $5,000. This is for a few important reasons:

So, we’re aiming to have your campaign surpass 100% funded as quickly as possible. Sometimes this happens in the first week – or even on the first day. We also want to keep up the momentum post-100% and keep aiming for the high end of the range. Enter: Stretch Goals!

Princesses Only Wear Putta Puttas is a children’s picture book by Charlottesville chef and author Priya Mahadevan. We ran her campaign in May of 2015 to fund the professional production of her book. Priya wanted to raise $12,500 to cover the costs of publishing ebook, paperback, and hard cover versions of her manuscript, and cover book promotion. When we did her network analysis, $8,500 came in at the low end, so that is where the public target was set.

This $8,500 goal was surpassed in only two days of campaign launch! So, we updated her campaign with the following image. An additional $2,000 would cover doing a full color hard cover print run of the book. As an added incentive to keep up the momentum, we promised those who pledged early to the campaign the opportunity to upgrade to the hardback if the target were passed. 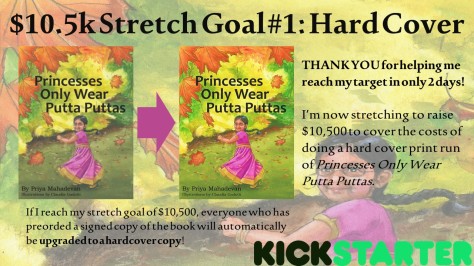 In fact, the first stretch goal was reached! So we updated the campaign again. This time, another additional $2,000 would be used to promote the book in Priya’s home country, India. Again, we created an additional incentive: ALL backers would receive the ebook version in addition to the other rewards. 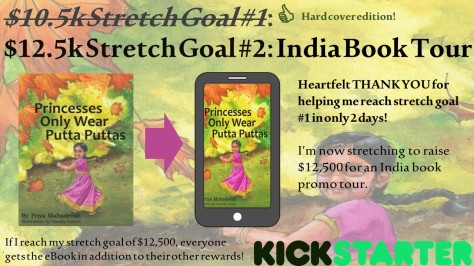 This second Stretch Goal was also surpassed before the end of the campaign!

There are a few important lessons here, in addition to the central message that Stretch Goals work.