There are three key types of supporters – VIPs – who make the difference between crowdfunding success and failure. Your VIPs are:

Each of your groups of VIPs is so important, they all get their own post. This post is about your Benefactors.

Benefactors are people who will pledge more than $500 to your campaign. And that $500+ is often for something intangible with low cost to produce. Sometimes, this money is truly a gift, a financial offer of encouragement for your project.

At first, when we look at the number of people likely to pledge more than $500 to your campaign, they seem like a small piece of the pie because they represent such a small percentage of the total people backing your campaign. 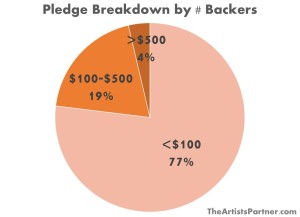 This breakdown is the average for our clients. Typically, there are only 1-6 Benefactors, representing less than 5% of the people who have pledged.

But they are key to your campaign’s success. Why? Because although they are your smallest group of backers, they represent the largest portion of funds raised.

This handful of people get you almost 40% of the way to your goal. VIPs indeed!

Each campaign is different, but some of the VIP benefits we often offer Benefactors include:

Make sure you treat your Benefactors right – they are key to the success of your crowdfunding campaign!

If you’d like a free analysis of your crowdfunding plans for your project, please fill out our Artist Questionnaire. We typically respond within two weeks. We look forward to hearing about your project!

10 thoughts on “How to succeed at crowdfunding: Benefactors”