There’s a bigger benefit to crowdfunding than the money: a core group of fans. Most people are joiners, not pioneers, so this core group of fans will be tremendously valuable for attracting other people to your project once it is realized. Here are a few ideas on how to both thank your fans and boost your project.

There are three key groups of people – VIPs – who make the difference between success and failure for your crowdfunding campaign. Your VIPs are:

Because they’re so important, Influencers and Benefactors each get their own post. This post is about the first group of your VIPs: Day 1 Backers.

Your Day 1 Backers are important, because there is a powerful psychological negative embedded in a campaign that has “$0 / 0% Funded” plastered across the top of the page. Every campaign starts at zero. And an almost unbelievable 13% of Kickstarter campaigns – over 27,000 – end at zero, too, without a single person ever backing it. 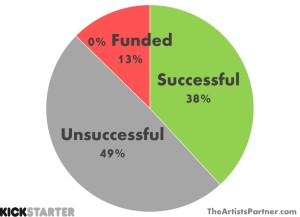 How does this happen? It’s an explanation similar to the house that has had the for sale sign in its yard too long. At a certain point, the public starts thinking there’s something wrong with your campaign, just by virtue of the fact that no one has yet backed it. This inertia becomes harder and harder to overcome as each day passes.

So, have a handful of people lined up who consider it an honor to back your project on Day 1. These are the friends, family, fans, and colleagues who have known about your project since its early days. They can’t wait to have a copy of your book or album or a ticket to your show in their hands. Make sure they know months in advance that your Kickstarter or Indiegogo campaign is coming.

They might pledge a little; they might pledge a lot. The role of your Day 1 Backers isn’t about the money. Their role is all about early momentum – they don’t require any extra convincing to support you. They’ve already bought into your idea, and they want you to succeed. They will convince other people who don’t know you or your project jump onto the bandwagon when they give your project that all-important boost from 0% to not-0% on Day 1.

Day 1 Backers are VIPs, and we treat them like VIPs. Every campaign is different, but some of the special benefits Day 1 Backers may receive include:

If you’d like a free analysis of your crowdfunding plans for your project, please fill out our Artist Questionnaire. We typically respond within two weeks. We look forward to hearing about your project!